So here I am in Paris. Sitting in a room that is not far removed from a bedsit not a hotel room, doing a blog. Hotel Crystal in Paris. I should be out drinking in the city, but I can do that anytime in the next 24 hours. Breakfast was a joke. Went down for breakfast, couple jammed right up against the table where the muesli was, no one else and nothing else. Is that all there is? Went back up to the front desk, told them that there was not much for breakfast. The place looked cleaned out, the special fridge for yogurts cleaned out and coffee pots emptied. He said someone should be down there. So I stomped down the stairs again. Out pops two women one large short middle aged woman and one tall and slim and beautiful young woman, both at different ends of the spectrum of femaleness. Looked like some comedy act from a black and white movie. Anyway I get my breakfast, croissant, un baguette , cafe noir. Oh yes Coffee is ok now, coffee does not dehydrate you. Seemingly just a food scare story, based on no facts. So drink your coffee and feel good about it. Just looked out the window (this minute), and its raining. Its been raining everyday now since I left Spain, which is two days. Bummer.
After my dinner last night which was very tasty, and I take back everything I said about French food just being about the sauce and losing the taste of meat or fish. The Mozzarella and tomato I had was just perfect. The cheese was not bitter, so it was fresh, and soft. No slight burning sensation on the tongue. They had blanched the tomato, to remove the skin, great idea. Actual I am sure I have seen or read that some where else, I Am talking about the tomato. 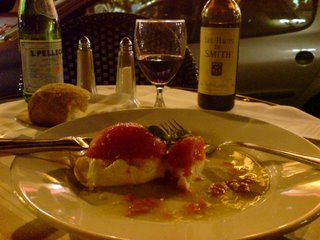 Makes up for not being able to go to Italy, Naples and taste the Mozzarella straight from the buffalo. Such a shame not being able to Nip across to Naples. After the meal I walked around the area, trying not to get lost. The hotel is just off St. Germain Bolavard, rive gauche (left bank). Passing woman says Bonsoir to me. Yes to Simon from the box. Must be those new glasses I bought in HK, gives me the aura of a thinker and do'er. Women in other cities never go around saying good evening to strangers in the street. No she was not one of 'those' women. Anyway this a city I must come back to again and again.
I am still having probelms with my Vodafone eMail account. San not login. Some server issue. Can not login on my phone or the web site. Such a pain, and so expensive.
Time to go out and say Bonjour to the rest of Paris.
Posted by ScotFree at 11:46 am