Alva - Fun guys in the garden 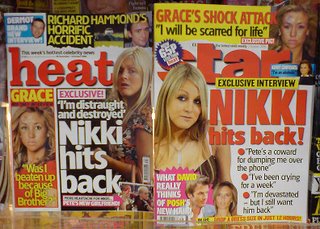 Now that is what I call boring. It must be the easiest job in the world to write for these magazines. I ask you who is interested in what Posh thinks about David's hair. Did they managed to fill 1 page, 2 pages about it. Someone must be laughing. The poor plebs that buy this magazine. It is all just to sell advertising. What ever next a magazine about your next door neighbours because that is what its reporting. People start to think they know these people, just like they are next door neighbours.
Quiz telephone tv shows. ITV Play made 9 million in 6 months of broadcasting. People pay 75pence in the hope they get on air to give a answer to a question. Even if they do not get on air they pay 75. Easy money. Seemingly it is all going to come to a end when it gets properly regulated. The shows are more boring than these gossip magazines.
Felt nervous about the future tonight. I tend to feel less confident and nervous about the future after the sun has set. Even if ma and pa do not want to use the britebox I should start. 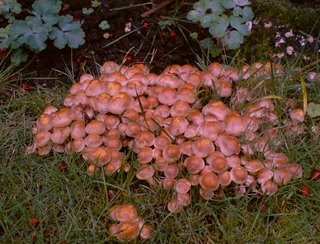 Found some fun guys in the front garden. So many mushrooms around. Should pick some and put in my cooking.
I have so much to be getting on with. I should be getting on with it. Instead I dream about the possibilities.
Posted by ScotFree at 1:38 am