Alva - The day after boxing day. Christmas was spent at Tom and Shenea at Ecclesmachan. Near Edinburgh, also near a place with wonderful imaginative name of threemiletwon. All one word, must be populated by Germans.
It was good to relax after finishing the articles on Edinburgh walks. I took a rest from it 1am on Christmas, and the woke up 5am to finish it for 7am. Sending it off. Then caught 2 hours sleep before getting up. Why do I always end up work late when I have things to do the next day. Time management issue maybe. Will start researching the article on Roppongi, Tokyo. How they developers are moving in and gentrifying the area.
It was good to talk with close relatives, the Kindlen clan do so few clan gathers. Well none, keeping ourselves to ourselves, end result is who Am I.
The Champagne went down a treat, even my mum drinking a "wee" bit of Champers and red wine.
All five of us had fun, pulling crackers, chatting, wearing silly hats. Same picture repeated up and down the land.
Around 11pm I started to feel tired, having worked late. So I tired and left them to it. Should that not be the other way round.
What presents did I get. Three boxes of chocolates. Did I not say that I was on a diet?
Tom and Shena interesting people involved with pharamkology and biology. Talking about dieases and health and such things. Not exactly the topic for a season of joy.
Still running in the morning. Strange there is no pain. I must have been so unfit when I returned from Tokyo. Need to check out when Yoga starts again.
Thanks you for the hello. My mum and dad say hello back.
Posted by ScotFree at 10:20 am No comments: Links to this post

Alva - The Day before Christmas

I Am running again. First day was yesterday. No pain. Bounced out the door and up the road. It is dark in the morning, and cold. Good to be running again. The air is so fresh here. Running along the back road towards Menstrie, passing the highland cows. Such a good way to start the day. Well I wanted to start running on Thursday the day I got back but my training shoes could not be found. Not a good way to start the day. So I went for a walk instead up to the woodland park. I took the, Leica 2dlux to along with me to capture the winter morning. I wish I had the Canon SLR with me, I so loved the photographs I could take with that camera and the 50mm lens. Shame it has been lost.
Posted photographs of Edinburgh on Flickr.com , under SiPeKi. Check them out. The photographs are to go along with the piece for Escape Magazine. I Am re-writ ting that piece to focus more on the walks. It was to general for there needs.
Need to get back to work and finish this travel article.
Posted by ScotFree at 10:15 am No comments: Links to this post

ALVA - Reset, where next? 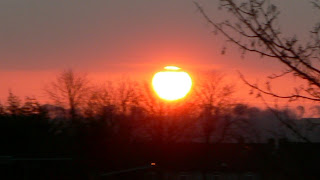 Woke up this morning to the red sun. Just like the Japanese flag. The sun rose and then was blocked by the clouds.
Back to the rest, where it all started.
Next I plan to go to Brasil.
In the meantime I will rewrite my travel article. They want a more focused article.
Also need a more structured day. So will start running again.
Also do post blog on my travels in Tokyo and Singapore. 3 weeks slipped past.
Posted by ScotFree at 10:52 pm No comments: Links to this post

Edinburgh - waiting on the train. 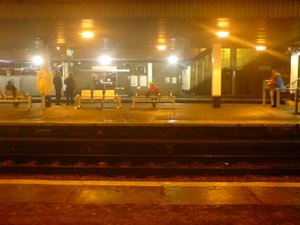 Back in Scotland. Just touched down. Waiting on the train to take me to Stirling. Then onto A-L-V-A. It was great seeing everyone again. Love you all. Jesus a man just puked behind me, just missing me! Welcome back, I guess.
BTW This my blog I do not take kindly to other people posting. There is always photoshop!

Posted by ScotFree at 10:19 pm No comments: Links to this post

Tokyo - Back in the big Mikan

Waiting for the train to Edinburgh this young woman came skipping down the platform, like some fairy. Smiling away and stopped right next too me. She asked me when the next train was I said in a couple of minutes. Oh good she said as she just missed the last one and went to the bar to wait. I could tell she had missed more than a few trains by the smell of the beastly booze. Then she told me she loved Stirling people so much nicer that Edinburgh. The reason for her visit to Stirling was that she had a court case today that had been adjourned. She introduced her self and Angela, like an Angel. Then came the story of her life. Basically a victim of life. Men are had been bad to her which lead to a series of events that lead to her being in Striling today. This made me wary of getting involved. I want to get to Edinburgh and then catch the plane. Life for this person seemed not to be so simple, and who knows what would have happened. I thought great what a start to my trip back to Tokyo. I meet the a real life character from "Trainspotting". I was polite to her, as people need to be shown that there are good people in the world. No need to be rude to her. Anyway the train pulled in, we got on the train. She went to her carriage and I went to mine. We said good by, and maybe one day we will meet. 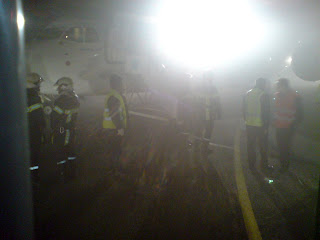 The flight to Paris was not with out event. I could feel some tight pain in my chest, and air seemed cloudy. I thought my eyes had been affected. No smell though. Then we landed in Paris, and the plane taxied very quickly to a stop. Turning corners tightly. Then they announced that there was smoke in the cabin and the fire brigade had been called out. Minutes latter the plane was surrounded by fire engines. No one panicked. Firemen came on board with breathing apparatus. Surprising we all sat there asking no questions. Then a bus came to take us off the plane to the airport. That was the end of that. Who knows how close we were to a disaster. I Am kind of worried about the pain in my chest. Which went away after getting off the plane but woke me up today. That is why I am typing this 6am in the morning. I hope its just some cold thing. The day before I could not sleep because of back pains. I think this is due to drink. 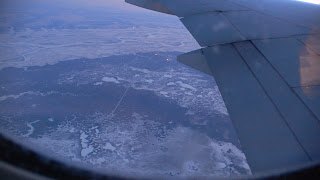 The flight form Edinburgh to Paris, apart from the near miss on being BBQ, and Paris to Tokyo was good. Service was good, food was great, and seat comfortable. Also they give out Champers in Economy. Great! Looked down on Siberia and sow these large fires burnimg away. They must be burning of the gas. Looks like massive bomfire parties going on. Arrival in Narita was smooth. Hired a phone and made my way by bus to Tokyo. The bus dropped me off at T-Car. 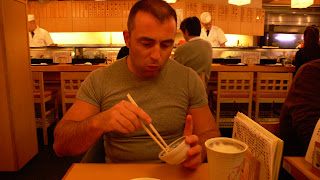 Robert picked me up in his new toy. Dropped my bags off and then went for Sushi. 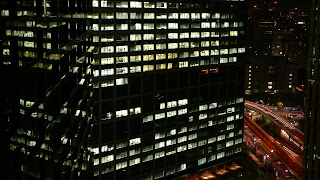 The view from the guest apartment was amazing. 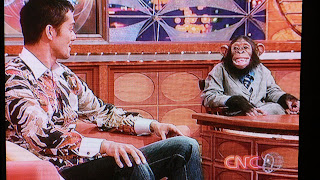 As usual Japanese tv did not let me down. Interview witha a monkey.
At the time of writing I do not have my PC connected to the internet. So will download the pictures when I do.
The next day, feeling full of the joys of life I moved my stuff to Mateen and Angelika home in Minami Azubu. I like Azubu, one of the places I want to live. Angelika was working, so I walked to her work place in Shibuya to say hello. Where I met up with Gary. So me and Angelika listened to Gary and what he has been up to and plans to do. Will catch up with Angelika later in the day. 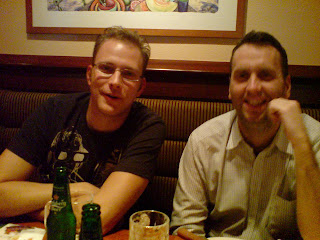 In the evening went to meet Martin. Went to the outback in Roppongi. That is when I carshed landed into Tokyo. As usual binge drinking, and a very late night that did not stop until 1pm Saturday. There is no leaving Tokyo with out a sore head.
Have been hanging out with Elena. Which as been good. 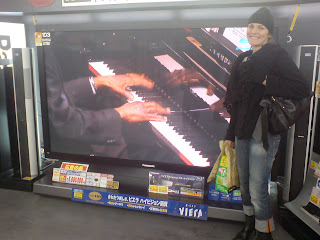 Did some shopping.
I need to get this piece for Escape done on Edinburgh. I need to write from memory as have left most of my notes in Alva. I might have placed them next to the suite case but forgot to pick them up. Bummer, but it must be done. Maybe that is causing the pain in my chest. Stress levels become relative.
Posted by ScotFree at 8:39 pm No comments: Links to this post