Irvine Welsh - On Scotland and a the Scottish People

Mr Welsh was interviewed in today's Herald for his new book, Skagboys. Interesting interview specially at the end when he talks about feeling Scottish only when he realises  others see him as Scottish. Here is an extract from the interview:

"I think Scotland is on the brink of great and exciting things. It's actually beginning to realise itself now. The nationalist debate seems to have got a lot more mature. All this f"***** Bannockburn, Culloden nonsense has gone out the window." Instead, he says, there's a Scottish aspiration for social democracy that's not shared south of the Border. "The two countries have gone their separate ways, so [independence] seems inevitable. "I always think the Union is nature's way of stopping the Scots ruling the world. We'd be unstoppable if we were independent. We'd still emigrate in droves but we'd do it from a very entrenched position of confidence. All that ambition and arrogance would be unbridled right across the world. It would be a sight to behold." 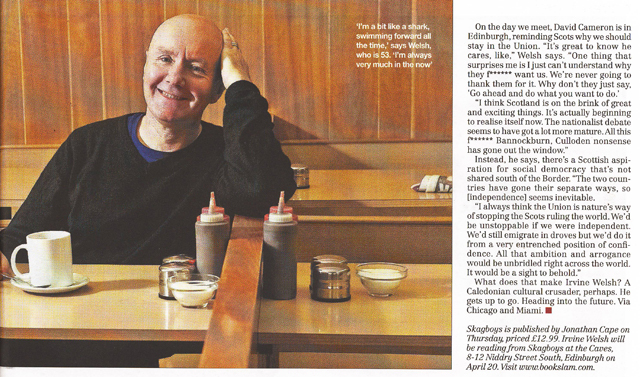 I am very much about living in the now, and so should Scotland. Can not wait until 2014 and I get the chance to take part in history, and vote YES. Have been waiting for that day since 1979, when I became aware of politics, and the struggle to form a fully independent state for the people living in Scotland.
Posted by Unknown at 9:51 pm